As more investors want to profit from the developing business, crypto usage is increasing by the day. According to research by Crypto.com, virtual currency adoption has nearly doubled since Bitcoin’s stunning surge to $65,000. However, considering the plethora of digital assets accessible, how can you decide which top cryptocurrency to invest in for long-term gains? This article will provide an answer to that query.

This top cryptocurrency, which has been existing for a long time, is a clear choice among investors.

Since its inception in 2009, Bitcoin has grown by more than nine million percent, making it our best cryptocurrency to invest in for long-term gains.

The world’s oldest virtual currency is the most valuable crypto asset in terms of market capitalization and the most actively traded by investors. As a result of its expanding popularity, Bitcoin is being accepted by an increasing number of businesses and even countries.

El Salvador, the first Latin American country to list Bitcoin as a legal tender after the US Dollar, is leading the Bitcoin adoption charge. Given Bitcoin’s volatility, this decision has sparked debate, although the second-largest US financial institution, Bank of America (BofA), has lately backed the decision.

El Salvador’s Bitcoin adoption was appropriate given the economic prospects, according to a statement of approval issued by the American bank. According to the Bank of America, Bitcoin adoption would enable seamless transfers, digitalization, and business operations for the country’s unbanked people.

Bitcoin’s popularity has not been limited to countries; it has also expanded to corporate circles. Institutional adoptions like Tesla’s, MicroStrategy’s, Square’s, Visa’s, and MasterCard’s have fueled additional crypto adoption.

PayPal, according to a storey in the Irish Independent, is putting together an all-star Bitcoin crew as it expands. 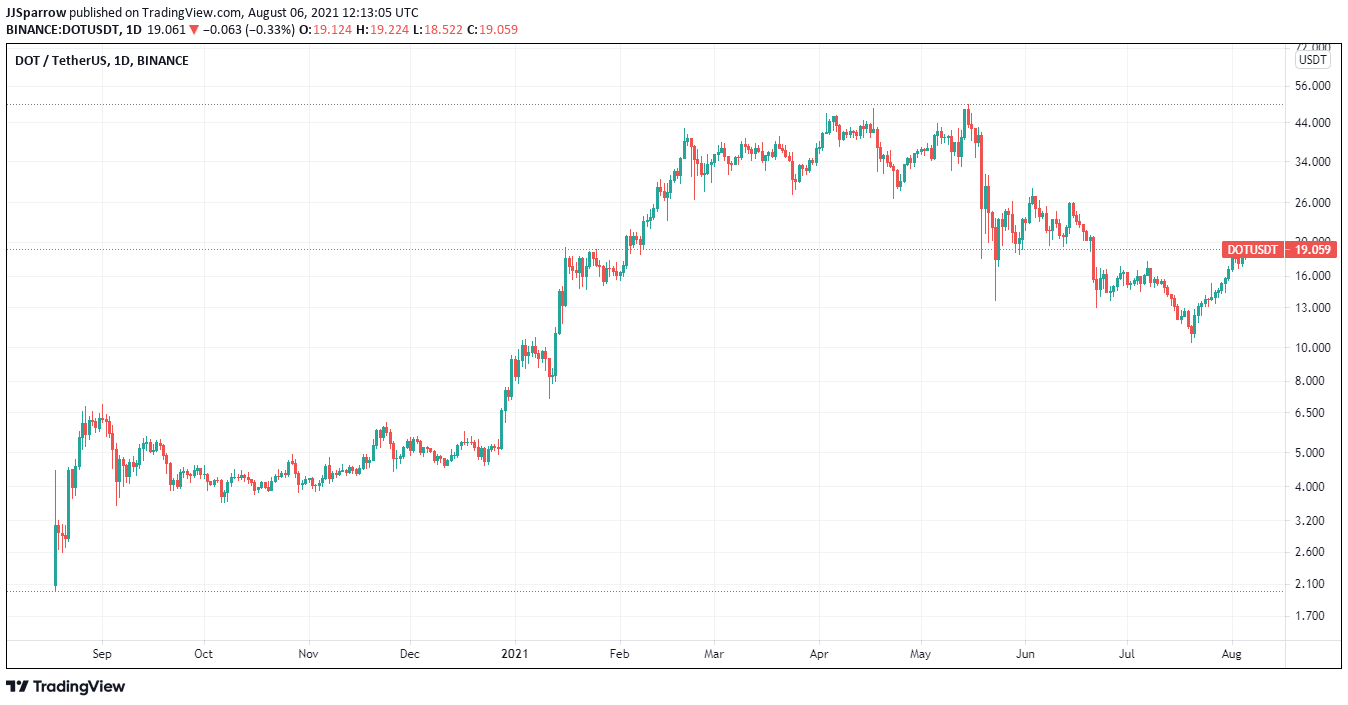 Polkadot, a blockchain interoperability platform, has seen increasing popularity in recent months. This has boosted the value of its native token DOT, making it a cryptocurrency to invest in for the long run.

In the meantime, additional Polkadot parachains are making significant progress. The Unique network, one of Polkadot’s parachain projects, was recently chosen by the United Nations to lead a nonfungible token (NFT) initiative against climate change.

With more to come, the Polkadot ecosystem is already bursting at the seams with innovative startups and cutting-edge technologies. Polkadots projects totaled 481 at the time of publication.

Polkadot is currently trading at $18.85 in terms of price. The asset’s 20-day moving average is $18.98, indicating that it is in an uptrend. DOT’s RSI is at 67.82, approaching overbought territory.

To shift from the proof-of-work (PoW) consensus mechanism to the proof-of-stake (PoS) mining protocol, the network has been working on important enhancements.

The Ethereum price soared when one of the network’s updates, code-named London, went online on Thursday. The London hard fork is made up of five Ethereum Improvement Proposals (EIPs), each of which contains a set of network code changes.

The Ethereum London upgrade seeks to address some network concerns, including scalability and excessive network fees. It is not envisaged that the entire PoS upgrade would be completed until 2022.

Ethereum’s London upgrade is said to have boosted the token’s price by 20% in the last week. On Thursday, the cryptocurrency rose to $2,620. Ethereum was trading at $2,778 at press time, up 3.72 percent in the previous 24 hours.

Chainlink, a popular decentralized oracle network, is another cryptocurrency to consider investing in for long-term gains. Chainlink is a network that connects smart contracts on the blockchain with real-world data. It allows data to be transferred from off-chain sources to blockchains with ease.

Chainlink’s Oracle nodes have since been used by several blockchain applications. Blockchain companies can use Chainlink’s oracle nodes to continuously transfer data from off-chain sources into the Chainlink network.

This information is then combined and made available for blockchain applications in aggregated form.

Swisscom, the country’s largest telecommunications provider, is the most recent company to use a Chainlink oracle node. Swisscom has entered the decentralized finance (DeFi) market by becoming a Chainlink node operator.

Polygon, an Ethereum scaling solution, is another coin to invest in for long-term gains.

Polygon has exploded in popularity this year, establishing itself as a leading Ethereum virtual machine (EVM)-based project in recent months.

Several decentralized applications (dapps) have been integrated into Polygon this year. DeFi platforms Aave, Curve, and Balancer are among several that have launched on Polygon.

In addition, centralized exchanges such as BuyUcoin have confirmed that Polygon wallets will be supported.

Polygon has also garnered over 125,000 daily active users and has a total value of $8 billion.

Users can now transact three stablecoins on a new bridge connecting the exchange to Polygon, according to the project. These are USDC, USDT, and DAI.

Polygon is also making inroads into the NFT market. Polygon Studios, a game, and NFT firm has been established using the Ethereum scaling solution. Polygon intends to expand its network with the new gaming and NFT studio, as the crypto gaming business continues to grow rapidly.

In addition, Polygon’s MATIC token is currently selling at $1.05, up 2.81 percent in the previous 24 hours.

The price of the 20-day MA is $1.053, with an RSI of 33.32. Now could be a good time for investors to consider MATIC as a top cryptocurrency to invest in for long-term gains.

What Will Be The Future Of Cryptocurrency in India in 2021